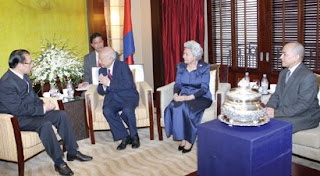 The Party leader congratulated the achievements made by Cambodia to build and develop the country. He then wished Cambodian people success in building a peaceful, independent and democratic country.

Manh also expressed his deep gratitude to the King, former King Norodom Sihanouk and Queen Mother Norodom Moninieth Sihanouk, and the Cambodian people for their support to Viet Nam during the country's struggle for liberation and unification in the past and construction and defence at present.

He also affirmed Viet Nam's policy of giving priority to building and developing relations with Cambodia based on the motto of "fine neighbourhood, traditional friendship, comprehensive and long-lasting co-operation".

He asserted Cambodia's determination to preserve and develop the fine neighbourly relation, traditional friendship, and comprehensive and long-lasting co-operation between Viet Nam and Cambodia.

Vietnamese leaders and people would never forget but always cherish the support from the Cambodian royal family and people in the past and at present, President Nguyen Minh Triet said yesterday.

He made the statement while meeting with King Norodom Sihamoni in Ha Noi.

King Sihamoni affirmed that he would follow former King Norodom Sihanouk and Queen Mother Norodom Moninieth Sihanouk in further consolidating and developing the friendship and comprehensive co-operation between the two neighbouring and fraternal countries.

The two leaders said they believed that the relations of fine friendship and co-operation between Viet Nam and Cambodia would become even closer and develop to new heights for mutual prosperity, and for regional and international peace and co-operation. — VNS