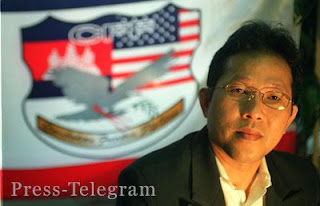 A Long Beach man convicted of orchestrating an attempted political coup in his native Cambodia that resulted in the deaths of three people was sentenced in federal court Tuesdajavascript:void(0)y to life in prison.

Yasith Chhun, former president of the Cambodia Freedom Fighters, was convicted in 2008 in connection with the Nov. 24, 2000, attacks in the Cambodian capital of Phnom Penh. Three members of Chhun's group were killed, and several Cambodian police officers and civilians were wounded.

Chhun, wearing a green windbreaker under chains around his waist, addressed the court in a tearful speech in which he talked of his suffering under the Khmer Rouge genocide that took the life of his father.

"I am not lucky like Americans who are born in this country," he said. " I was, unfortunately, born in Cambodia."

He said that after coming to the U.S. as a refugee in 1982, he felt he could no longer stand by as his native country descended into political chaos. "I had to do something for that country," he said. "I've been punished because I failed, that I'm not good enough to overthrow that government."

Judge Dean D. Pregerson said he did not believe Chhun was an "evil human being," but that the prison term was the consequence of Chhun's actions.

"I do not want to be the person who does not say to all those groups that, if you conspire against the U.S., that the U.S. will tolerate or be lenient to you," Pregerson said.

Chhun, who was convicted in 2008 of the attacks in Cambodia, plotted the assaults from his Long Beach office, prosecutors said.

After the attempted coup, he returned to the United States, took credit for the attacks in the media and said he would do it again, according to prosecutors.

The U.S. attorney's office took jurisdiction of the case based on the belief that Chhun had violated several federal laws governing the commission of crimes in foreign nations.

Prosecutors said Chhun went to Cambodia in 1998 to meet with military personnel opposed to the ruling Cambodia People's Party, headed by Prime Minister Hun Sen. After the meeting, the Cambodian Freedom Fighters group was formed and Chhun was appointed president.

The military faction in Cambodia agreed that it would acquire weapons and that Chhun's group would be responsible for raising funds "for the violent overthrow of the Cambodian government," according to the U.S. attorney's office. A fund-raiser was held at the Queen Mary in Long Beach, prosecutors said.

Prosecutors presented documents at trial in which Chhun allegedly wrote that he would "tear Hun Sen" apart. In a presumed reference to other government officials, he allegedly wrote he planned to "cut their necks" and "send them to hell to soon,"

In fact, Chhun hid on the border of Cambodia and Thailand while about 200 members of his group carried out the assault with AK-47 rifles, grenades and rockets.
Posted by CAPJ at 8:45 PM