The Cambodia's ruling party -- the Cambodian People's Party (CPP) on Thursday reaffirmed at it plenum Hun Sen's candidate for prime minister post for the next terms.

"The plenum reaffirms its endorsement of Samdech Akka Moha Sena Padei Techo Hun Sen's candidacy for the post of prime minister for the next terms," announced the party's communique released at the ending of the 35th Plenum of the Fifth-Term Central Committee of the CPP. 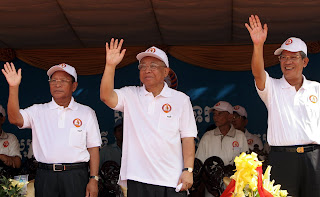 om across the country gathered at its headquarters in to have a two-day plenum started on Wednesday.

Last month, at the gathering to commemorate CPP's 59th founding anniversary, Chea Sim also reaffirmed party's decision to support for the candidacy of Hun sen for the post of prime minister for the following terms.

Hun Sen, 59, has ruled the country, as the prime minister for more than 20 years.

is holding general election every five years. The last election was held in 2008 and the next one will come in 2013.

In last general election, the CPP won 90 seats out of 123-seat parliament, following by opposition Sam Rainsy Party with 26 seats, Human Rights Party with 3 seats, and two each obtained by Norodom Ranariddh Party and FUNCINPEC party.

CPP was found on June 28, 1951 and is, so far, the biggest political party in the country.