The Japanese government has donated US $2.26 (two million two hundred sixty thousand) to the national side of the Extraordinary Chambers in the Courts of Cambodia (ECCC) after the pledging conference held in last 25 May 2010.

The fund was awarded through the Japanese Ambassador to H.E. Masafumi Kuroki to ECCC’s Acting Director of Administration, H.E. Kranh Tony, during an official ceremony held at the tribunal on Friday July 2.

This fund guaranteed that a total of US $2,257,727 from the counterpart fund of the Japanese Non-Project Grand Aid will help cover staff of national component of the ECCC remuneration from mid-April to September 2010.

In his award ceremony speech, Mr. Kuroki said the Japanese government had decided to help because “the ECCC was facing a critical financial shortage at a very important stage of the judicial process”, ahead of the judgment hearing in Case 001 against Kaing Guek Eav alias Duch on July 26th and the closing order of case 002 scheduled in September.

“The Khmer Rouge Trials are the completing stage of the Cambodian peace process as measures to prevent the recurrence of atrocities committed during the Khmer Rouge regime,” Mr. Kuroki said.

“I hope that this Japanese assistance will not only help the ECCC overcome the present financial shortfall but also further strengthen the spirits of national staff of the ECCC at this critical juncture of the judicial process,”

Mr. Kuroki commended the Royal Government of Cambodia, the UN and the ECCC in their combined efforts to help the tribunal “deliver justice to those who are victims of the Khmer Rouge and therefore contribute to national reconciliation”.

In return, Mr. Tony expressed his “deepest gratitude” to the Government of Japan which, as the ECCC’s largest donor, plays an essential role in the peace-building process and socio-economic development of . 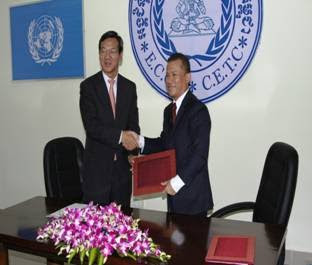 “’s contribution is an excellent humanitarian gesture to bring to an end the dark chapter of Cambodian history,” Mr. Tony said.

“This even makes clearer the attention of the people and the government of to the weal and woe of the Cambodian people in physical and mental terms.”

Mr. Tony also underlined the significant progress made by the ECCC in 2009 thanks to the “spiritual and financial contributions” of donor nations like .

“The successful completion of the trial phase in Case 001 was widely welcomed both nationally and internationally,” Mr. Tony said. “Investigations in Case 002 concluded in January, and we are expecting the Closing Order by September. We are hopeful that the ECCC will find justice for the victims whose parents, siblings and relatives died miserably under the barbarous genocidal regime of Pol Pot.”

is the ECCC’s largest donor and has been supporting the ECCC since the tribunal’s establishment in 2006. To date, the Japanese government has provided financial aid about US 55.89 million, or 45.3 percent of the total budgetary contributions by donor nations.

Japanese Ambassador commends the Royal Government of Cambodia and the United Nations as well as all the people involved in the ECCC for the progress made in 2009 and expected significant progress in 2010 at this critical juncture of judicial process.

Note to editors: Non-project aid is grant aid intended to provide rapid support to developing countries with economic difficulties, as part of assistance to improve the country's economic structure. Since this aid is not earmarked for specific projects (e.g. building schools, etc.), it is called non-project grant aid.

Developing countries' governments set aside local currency funds equivalent to a certain amount of the value of equipment procured by grant aid. These funds are then used for local economic and social development projects after consultation with the Japanese government