Phnom Penh has asked the 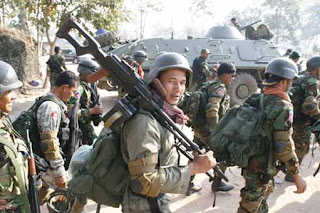 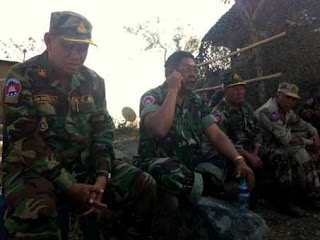 Preah Vihear which was listed as a World Heritage Site in 2008.

The Un Security Council, by calling for a "permanent ceasefire" between Thailand and Cambodia after a border dispute erupted into a small war last week around a Hindu temple, did just that. 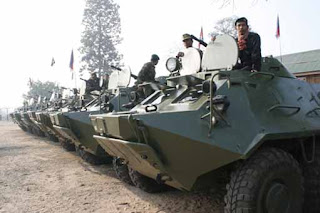 Thus, irrespective of how the Thai government and media want to spin this issue, it is clear and evident, that the United Nations has taken a serious view of the conflict created by Thailand, and has given ASEAN, which convenes a meeting on 22 February, to have the first go at conflict mediation.

Last Sunday, Thai Prime Minister Abhisit Vejjajiva said his foreign minister would insist that the crisis be settled on a bilateral basis without outside intervention.

"Cambodia is calling for [intervention by] a third country, the UN and peacekeeping forces. Thailand will call for a return to bilateral talks on border conflict" he said.

The prime minister has laid the blame for the crisis on Unesco's decision to declare the temple ruins, the most celebrated example of ancient Khmer architecture outside of Cambodia's Angkor Wat, a world heritage site even though the land around it is supposedly disputed because of Thailand’s insistence on its own interpretation and unilateral, secret and internationally unrecognized map.

At the 35th meeting of the World Heritage Committee in July, Cambodia will be pushing for its Preah Vihear management plan, which also covers the area claimed by both countries.

For peace to prevail and for the ancient temple to be treated like a cultural heritage site in a sustainable manner, the international community should pay attention to Cambodia’s plea for multi-lateral mediation and reject outright, Thailand’s call for the Preah Vihear temple to be delisted or else Thailand will withdraw from Unesco.

This statement speaks of belligerent and deranged premier who has isolated or blinded by the spin pulled by his advisors and the pressure mounted on him by his one time allies, the PAD. The PAD is pushing for the military option.

And, when one side is pushing for a military option and at the same time, beefing up its armed forced on the conflict zone, not only with troops but also with heavy weaponry, the situation has become inherently dangerous and sufficient to precipitate an all out war with Cambodia.

At present, many see the issues related to Preah Vihear through the prism of territorial dispute, but they need to keep the borderline and world heritage issues separate. This, the Thais have failed miserably at doing.

If one follows the Thai press, like all of them-it is obviously pro-Thai to the maximum-as they say “The Truth is the first thing that gets killed in war.”

The conflict has led to the point that Cambodia asked for UN peace keeping forces and Thailand saying the matter is between Thailand and Cambodia.

Then Cambodia wants outside mediation, but Thailand wants bilateral or 2 way talks.

With those attitudes, the matter reached the UN’s Security Council. But again, the old saying on how the truth dies in war.

Even with pictures of Thai bull-dozers going about making a road in the Thai Cambodian disputed territory that sparked this series of clashes between Thailand and Cambodia-Thailand the intransigent Thai army claimed that Cambodia started the attack.

“Thailand has witness to the UN Security Council that Cambodia started the war,” said many Thai press like Thai Rath.

So the Thai press, like the True TV-just said this morning-right there after the UN Security Council meet that “UN calls for bilateral talks” meaning between Thailand and Cambodia.

But then BBC, a global level media outfit, just reported that the UN Security Council told ASEAN to mediate the Thai and Cambodia talks.

So what is it, bilateral like the Thai press says or is it ASEAN mediation being multilateral?

And what now? Cambodia said it will not talk bilateral with Thailand and Thailand says it will only talk with Cambodia bilaterally.

To top it off, the Thai prime minister, Abhisit, said earlier, quote: “No outside mediation needed.”

Thailand is a much larger country than Cambodia, economic wise, military wise, and population wise.

By bringing in such body as the UN or ASEAN-that takes away Thailand’s advantage-and place the mediation and negotiation in the hands of a body like the UN or ASEAN-which stands for equitable and on the same level solution seeking.

Not a single Thai press dares to ask just a simple question, and that is, if the Thai security apparatus is right-why would Prime Minister Hun Sen, be asking for UN and EU peace keeping forces on its border with Thailand?

The following is from BBC:

The UN Security Council has urged a permanent ceasefire between Cambodia and Thailand after deadly clashes in their disputed border area this month.

The council’s president said there was “great concern” over the clashes.

Maria Luiza Ribeiro Viotti was speaking after after closed-door talks with the foreign ministers of Cambodia, Thailand and Indonesia.

Thailand opposes UN mediation, saying it can settled by the two states.

But Cambodia has described itself as being at war with Thailand and has suggested the UN send peacekeepers to the disputed area.

The council, Ms Viotti said, “called on the two sides to display maximum restraint and avoid any action that may aggravate the situation”.

Indonesia, as the current president of Asean, has been leading mediation efforts.

In recent days, the guns have fallen quiet, but the situation at the border between the two countries remains extremely tense, the BBC”s Rachel Harvey reports.

The two heavily armed militaries are ranged against each other across a 4.6-sq km (1130 acres) stretch of disputed land. Accordingly, the presence of a third Party to mediate and to observe the buffer zone as requested by Cambodian Prime Minister is a Must since it will build a transparent process and mutual confidence, and more importantly to stop once and for all the trading of who instigates the fighting first. Now, the Ball is in the court of Thailand and the Latter should not be afraid of third Party if they do have the goodwill and true intention to build a lasting peace and good neighbor with Cambodia.

(By T. Mohan, a long term resident of Cambodia and political analyst)