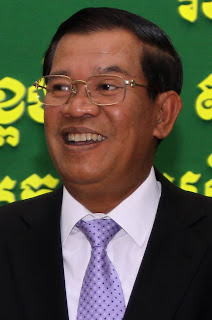 "It will be better if ASEAN chair can sign in the permanent ceasefire," said Hun Sen.

Meanwhile, the premier put forward four points concerning the permanent ceasefire: firstly, Cambodia and Thailand agreed to stop fighting for good and permanently. No more weapon clashes forever; Secondly, no mobile of armed forces for this time and both sides maintain the same places of armed forces to wait for the resolution on measuring and demarcating the border;

Thirdly, Cambodia and Thailand encourage the two countries' army commanders to open talks to improve good cooperation in order to make the situation returning to before July 15, 2008;

And fourth, to ensure the effectiveness of ceasefire, Cambodia will ask ASEAN countries to control of ceasefire.

"I believe Thailand will not agree at this point, but if Thailand does not agree the fourth point, Cambodia will agree to receive forces from ASEAN countries to station in Cambodian territory to observe and ensure the ceasefire," Hun Sen added.

Hun Sen said that he has already sent the four-point of the draft permanent ceasefire to Thailand Prime Minister Abhisit through Thai Deputy Prime Minister Trairong Suwankiri, who is now in Cambodia for the opening of Thai trade expo.

He stressed that the multi-lateral talks would be used only in the border dispute with Thailand. All the meetings, even the JBC (Cambodian-Thai Joint Commission on Demarcation for Land Boundary ) meeting, must have the participation of the ASEAN chair or representative, Thailand should not be afraid of the third party.

"While other forums, besides border dispute and Preah Vihear temple, will be done bilaterally, such as trades, tourism, culture...," Hun Sen said

"I appeal that we don't push the situation into the confrontation on all sectors," he said. "We should contain the dispute, not let it spread further."

However, on the issue of Preah Vihear temple, Hun Sen said that "we cannot walk back on this issue, it's the heritage left by our ancestors--I just maintain and protect it for our next generation.We don't want any land from the other."

Cambodia will welcome all types of observers from ASEAN, he said. "Observers can be civilians, military or police, they can be in group of ASEAN or each country can send their observers to the disputed areas."